When you want to include external code in your git repository, for example a third-party library or code shared with another team, there are two popular options: git-submodule and git-subtree. Unfortunately both suffer from some problems and this led me to start thinking about an alternative way to handle external repositories.

I will first summarize how git-submodule and git-subtree work and discuss their drawbacks. I will then introduce an alternative to these, “git-subrepo” and present a (partial) proof-of-concept implementation. In the following, we assume a single submodule/subtree/subrepo.

Submodules are the officially supported way of including external repositories; git-submodule is included with every git installation. A submodule is basically a pointer to a commit of an external git repository. This model works well when you want to include a third-party library in your project that only occasionally needs to be updated.

On the other hand, if you use a submodule for a tightly-coupled library to which you will often be making changes, you will find that submodules are not the answer. In this use case, you will simultaneously be making changes to your top-level project and the library. When the time has come to commit these changes, you first need to commit your changes in the submodule, then do the same in your top-level project. Oh, and make sure you push the changes to the submodule before committing and pushing the top-level changes or other people will run into trouble when pulling in your top-level commit. Things get even more exciting when you want to push that submodule commit afterwards to fix things, only to find out that someone sneaked in a commit in the meantime! Now you’ll have to create a new commit on the top-level project to point it to your rebased commit, hah! In short: too much of a hassle and far too easy to make a mess.

If that’s not enough to convince you, you should try branching with this setup. You’ll have to manually branch (and later merge) each of your submodules when you create a new branch.

In the past, I have worked with a git repository containing a dozen tightly-coupled submodules for code-sharing with other teams. Needless to say, it didn’t take very long to realize that submodules are not suited for that use case.

git-subtree avoids most of the problems submodules suffer from. During everyday work, you won’t have to worry about a thing, as git-subtree is only needed when interfacing with external repositories. So, most of the time you are working with a single repository; the library is simply included in your repository as a subdirectory. That means that branching is also transparent. This is infinitely more comfortable than mucking about with submodules.

At some point you can choose to have git-subtree extract the changes to your library from the commit history. This will create a new branch with a commit for each commit of the top-level project that includes changes to the library. The root directory of this new branch is equal to the subdirectory where the library resides. The new branch can then be pushed to the library’s remote, where it can be merged with other branches. After all, that’s the point of having a submodule or a subtree.

Unfortunately, splitting out these subtree changes can take a long time. And unless you use the --rejoin option, git-subtree needs to perform this splitting over and over for all commits in your history on each split. The --rejoin option merges the new subtree branch back into the main project’s branch, duplicating the existing commits. While this raises no technical worries, your history will be complicated unnecessarily. 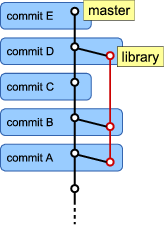 Commit A is the commit that introduces the subdirectory where the library resides, so this yields the first commit of the library branch. As with git-subtree, an existing library branch could be subtree-merged into the master branch first, in which case we would build on that history.

Note that the library branch is completely independent of the master branch, so it can be pushed to the library’s remote at any point in time. There is no need for splitting or rejoining as is the case with git-subtree.

Aside from splitting up commits, we also need to take special care when merging and rebasing. The figure below illustrates how merges should be handled. The branched-off subrepo commits first need to be merged into the library branch. As with the commit-splitting above, the resulting subrepo merge-commit is referenced as a parent of the merge-commit on the main master branch. 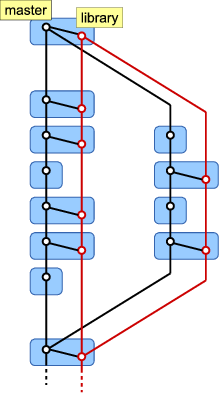 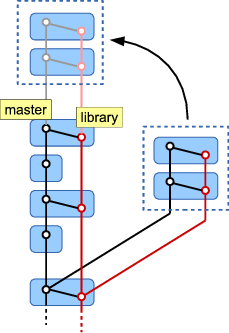 I hacked together post-commit and post-merge hook scripts to implement some of the functionality discussed above. These hooks expect you specify the subrepo directories in a .gitsubrepos file in the root of your repository. Each subrepo directory should be specified on its own line.

The post-commit hook should work fairly well. Since this is a post-commit script, you simply perform your commit as usual. The hook script will create the subrepo commits for each of the subrepos with changes, cloning the commit metadata (timestamp, author) from your commit. A new main-line commit will also be created that references the subrepo commit as a parent. After finishing, git will still report the SHA-1 of the original commit though, so don’t let that fool you.

Note that branching is handled transparently. The parent for the split-off subrepo commit is found by walking the history down to the last commit that merges in a subrepo commit. Branches have no influence on this.

During merging, you handle conflicts as usual, after which the post-merge hook will try to create merge commits for each of the subrepos. In its current state, the hook will produce some unexpected results in some situations though.

I have not yet attempted to write a hook to handle rebases and amend-commits. This will almost require a post-rewrite hook.

Assuming it is possible to write a post-rewrite script to handle rebasing and amend-commits, I believe subrepos could be a better alternative to git-subtree. Unfortunately, I also see some problems with this solution.

First, I don’t think hooks are the correct way to implement subrepos, but I have no idea how to go about it otherwise. I’m not aware of any other git features that allow plugging into the commit, merge and rebase processes. The alternative is to require the user to use different commands for performing these operations, which is something I want to avoid.

Second, the way the history with subrepo commits is displayed in git-log and gitk (and other graphical git front-ends) leaves something to be desired. For instance, if you commit changes to N subrepos you will end up with N+1 commits, which clutters the commit history even for small N. Take a look at this sample repository.

Also, each commit with subrepo changes will be displayed as a merge commit. Gitk does not show changes in the subrepo if this commit only merges in a single subrepo commit. When multiple subrepo commits are merged in, gitk does show the changes, but as a complicated N-way merge diff.

Ideally, gitk should be made aware of subrepos; it should group all subrepo commits together with the main commit and display it as a single entry. I feel this is a fair price to pay for proper, first-class subrepositories support.

For future reference, here are some ideas for git-subrepo.